Posted by the Blue Ocean Team

Reconstructing the boundaries between people’s desire for faith and spiritual connection with their secular lives.

Blue Ocean Strategy, created by W. Chan Kim and Renée Mauborgne, goes beyond business. In New England a group of people felt inspired to bring back faith and spirituality to an increasing number of people leading predominantly secular lives.

If the last time you walked into a church was for someone’s wedding, you’re not alone. At least, not in the New England area of the United States. Five of the six New England states rank among the bottom 10 states for church attendance, according to Gallup’s 2014 survey that interviewed 177,030 U.S. adults. Vermont, New Hampshire, Maine and Massachusetts have the lowest average attendance rates in the nation, with Connecticut not far behind.

The results are neither new, nor surprising for the Northeastern region of the United States. Back in 2004, nearly one-fifth of the parishes (65 out of 357) in the Roman Catholic Archdiocese of Boston were closed down due to declining attendance and increased financial problems. This trend has continued.  In April 2015, Boston Globe ran a story featuring a big problem confronting many neighborhoods in Cambridge, Massachusetts: what to do with a beautiful but abandoned church that was an anchor of the community in the past. 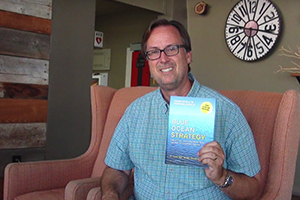 So, what’s going on? Dave Schmelzer, Founder of ‘Blue Ocean Faith,’ shares his view. While Schmelzer attended church regularly as a child, as teen and later as a young adult he didn’t. He was very skeptical of church teachings; in particular its all or nothing approach, which was often inconsistent with people’s secular lives. Statistics show that on average more than 80% evangelical youth leave the church after high school, never to return. A small percentage returns only after having kids of their own.

And yet, at the same time Schmelzer observed that he and many other people were still searching for spirituality and some connection to God. In blue ocean strategy terms, he was in effect a noncustomer of traditional churches, like the great majority of people in New England. 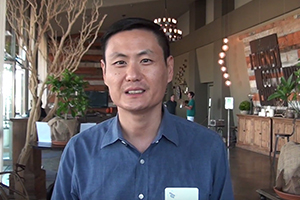 He believed, however, that it didn’t have to be that way. Along with Charles Park and a few other like-minded people, Schmelzer started a new movement. Challenging the conventions in the world of faith, they opened a new church in the heart of Cambridge Massachusetts, a blue ocean church. “I had read Blue Ocean Strategy,” explained Park, “and I saw it’s direct connection to the faith challenge we observed. Our goal was to take a blue ocean approach to faith.” Inspired by blue ocean strategy, they named their movement, ‘Blue Ocean Faith’.  Its goal was to reconstruct the boundaries between people’s desire for faith and spiritual connection with their secular lives.

Blue Ocean Faith reconstructs boundaries between the secular culture of many people’s daily lives with spirituality and faith and people’s desire to find answers to higher life questions. 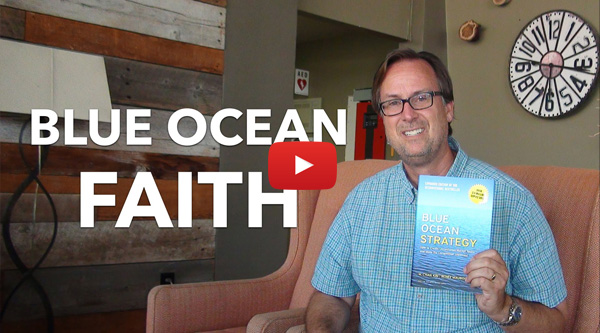 Against all odds, blue ocean church quickly took off, becoming far and away Cambridge’s largest church within the first four years. Its growth was fueled by an odd and intriguing mix of people. Almost half of the church members had only distant previous church experience, if any.  They were, in effect, previous noncustomers of churches.  While the church was, on the whole, highly educated with a number of Harvard and MIT faculty, deans and post docs, it also drew heavily from nearby housing projects.

Our goal was to take a blue ocean approach to faith. – Charles Park, Blue Ocean Faith.

The fact that half of the church members were earlier non-churchgoing was unheard of in the area. On average only 3% of new attendees to the most successful churches were previously non-churchgoing. For the blue ocean strategy inspired church, however, that rate was about 50 percent. The average church size in Cambridge was 35 people, including children, and the biggest church in town was a historic African American church that gathered around 350 people on a Sunday.  Within the first four years the blue ocean church was attracting up to 1,000 people on any given Sunday. And it became one of the top 5 percent most ethnically diverse churches in the country.

Blue Ocean Faith has since expanded to become a network of churches around the United States, with a growing number of churches opting to become ‘Blue Ocean Churches’. Thousands of secular as well as religious people have found that faith can offer them a profound connection to themselves, their world and God — all without asking them to leave behind who they actually are.

The founders of Blue Ocean Faith observed that embracing faith and going to a church in the traditional sense meant giving up your culture and embracing the social and moral values and practices that a church preached. Or it meant, living two separate lives – in and outside the church. This is what made Dave Schmelzer and his friends ‘noncustomers’ of the traditional church and that’s what they think turns away many others. ‘That’s almost always the central fear that keeps people from embracing faith: if we take the risk of discovering if there’s a God who might offer us things we deeply want, will the tax be a cultural change that’s unthinkable?’

‘Everyone has a culture. It may not be perfect but it’s their culture,’ says Dave Schmelzer. ‘I have the good culture. You have the bad culture. There is sort of a war as to which culture would win.’ ‘Our question was, how do we thrive in that, instead of fighting against it,’ he says.

‘We just felt like there’s another way to go that’s more of a blue ocean approach that can bring new ways of thinking about faith, that can bridge the divide and can appeal to secular people,” says Charles Park, a key leader of Blue Ocean Faith, with a PhD in Economics from MIT.

We just felt like there’s another way to go that’s more of a blue ocean approach that can bring new ways of thinking about faith, that can bridge the divide and can appeal to secular people.

‘I have a background in Economics and a PhD in Economics from MIT.Since the business world was of interest to me, I ran across this concept of creating blue oceans of new market space that did not exist before,’ says Charles Park. ‘Why is that relevant to us in the faith world? Because there is too much red ocean type of thinking in churches.  We are not going after can we make a better church, can we teach the senior pastor to speak a little better, or can we have a little bit more exciting youth group.  We are trying to come up with a different way thinking about pursuing faith that can really bring people together. It’s a different way of thinking altogether.’

‘We are such fans of Blue Ocean Strategy,’ says Dave Schmelzer. ‘The idea of the Blue Ocean Strategy book,” by W. Chan Kim and Renée Mauborgne, “actually fairly accurately characterizes what we are in fact trying to do: sailing out into an uncharted horizon, into a peaceful pretty place as opposed to a choppy difficult spot. We have been so helped by realizing that we are about connecting people rather than dividing people and religion often does divide. Well, the blue ocean is what connects all the continents around the world. It is the bond that connects people, brings life’, he says.

‘Blue Ocean Faith welcomes people from all different secular cultures. It offers an approach to faith that allows the coexistence of differing views and opinions when discussing moral questions. In contrast to the conventional practice it does not make them choose between all or nothing when embracing faith’, Schmelzer explains. Instead it invites them to explore faith, spirituality and connection to God from within their own culture, based on who they are in their secular lives. Blue Ocean Faith reconstructs boundaries between the secular culture that people have in their daily lives with the spirituality and faith that people seek in their quest to find answers to higher level life questions.

‘If people are culturally of a Christian religious tradition, they often feel content there in which case we wouldn’t have much to offer. People that we appeal to are people who feel dislocated from cultural religious tradition, yet they feel a powerful desire of meeting and connection with God. They are looking for other people who are willing to have a conversation from that point of view,’ says Dave Schmelzer.

‘In certain settings, if I may say in red ocean terms, there is such a feeding frenzy for church goers’, says Dave. Blue Ocean Faith has been successful in moving away from that. Instead of building a better church in the conventional sense, it is reconstructing boundaries between the church and secular culture.

Disclaimer: The views and opinions expressed in this blog post belong solely to Blue Ocean Faith, an independent, nonprofit organization. The intention of this blog post is to neither support nor reject the ideas expressed herein, but to show how blue ocean strategy is being applied beyond the world of business.

The Blue Ocean Team shares case studies, stories and practical insights related to the blue ocean tools and principles developed by Chan Kim and Renée Mauborgne. Our blog is there to help you ‘shift your mindset, go beyond competing, and create your own blue ocean’, whether in business, government, or personal life.
We use cookies to ensure you get the best experience on our website and continuing implies your consent - Read our full cookie policy Okay, don’t show me again